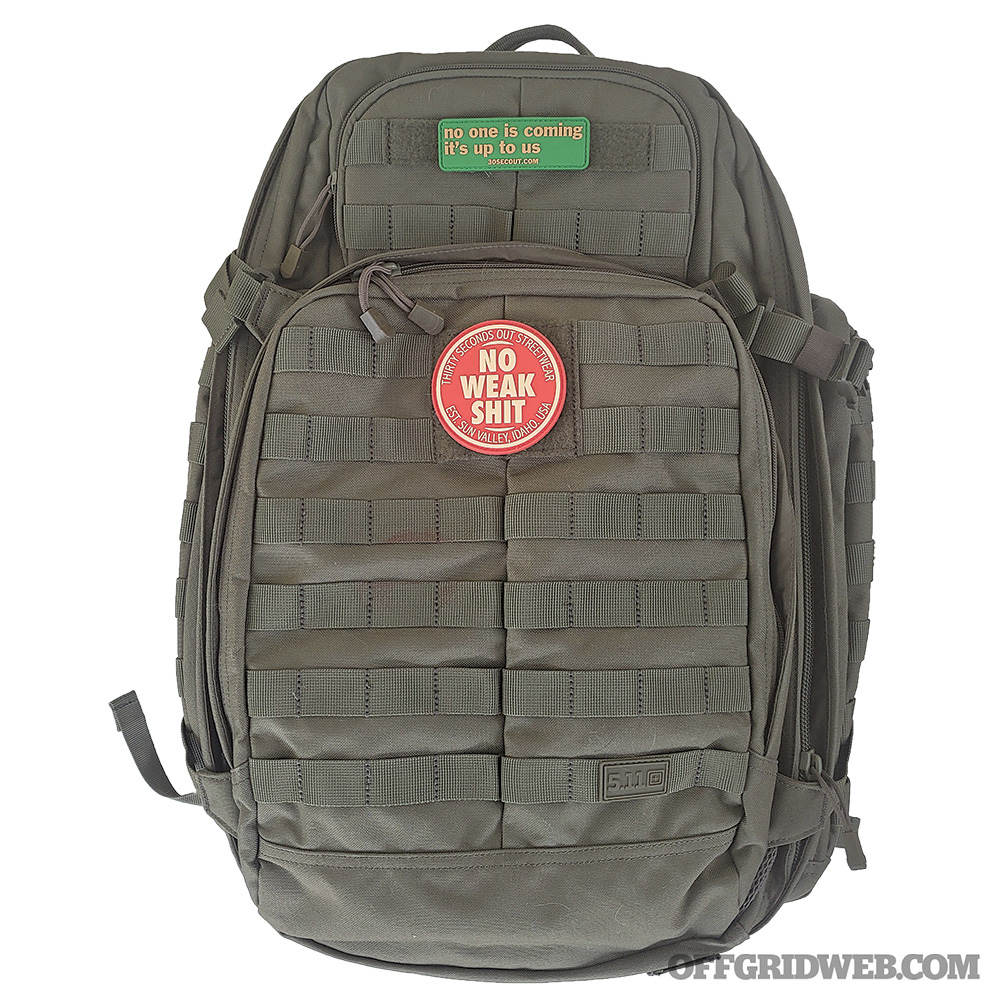 You never know how much you really believe anything until its truth or falsehood becomes a matter of life and death to you. It is easy to say you believe a rope to be strong and sound as long as you are merely using it to cord a box. But suppose you had to hang by that rope over a precipice. Wouldn’t you then first discover how much you really trusted it?” — C.S. Lewis, A Grief Observed

Every time I leave my house for a search-and-rescue mission, clutching gear which I’m about to stake my life on, I think about that quote from Lewis. Sometimes it’s a battery-operated rescue beacon to ride shotgun with me for a flight across the Gulf of Mexico, in search of high adventure on Florida’s Lost Coast. Next time, it’ll be my fancy new lightweight Team Wendy helmet, as I’m deployed by the State of Florida’s Urban Search and Rescue Task Force in the pursuit of saving lives.

The 5.11 RUSH72 bag is one such piece of gear I’ve come to depend on. I’m now working with my second generation of these bags, having started out with an original RUSH72 about 10 years ago. I counted on it to hike rim-to-rim through the Grand Canyon, carrying about 30 pounds too much of cushy luxuries like a heavy air mattress and clothing. Better yet, I was foolishly navigating using a park brochure instead of the detailed topographical maps, which I had accidentally left sitting in the car at the top of the trailhead.

The irony of a search-and-rescue professional getting lost or even dying inside the Grand Canyon wasn’t lost on me, but thankfully both me and the bag made it out to the North Rim. The RUSH72 has also accompanied me on four search-and-rescue deployments for major hurricanes, as well as the recent Champlain Towers (Surfside) building collapse.

These days, I mostly have transitioned to a Tactical Tailor Cerberus 72-hour medic pack for hiking, and I keep the 5.11 RUSH72 bag on standby exclusively for search-and-rescue missions. The RUSH72 isn’t a small bag. If it’s fully loaded, it gets overweight fast. I learned this the hard way more times than I’d like to admit — even after the Grand Canyon — after turning what should’ve been easy outings into grimace-inducing treks.

For this reason, I have a smaller 5.11 RUSH12 that I normally carry full-time. But because of the RUSH72’s cavernous size, I keep it inside a vehicle if possible, except for the rare occasion I’m out in the field and away from basecamp overnight when I wear it full-time.

Here is what I normally keep inside:

I think as I’ve gotten older, I’m increasingly fed up with sleeping on the ground. I have a Coleman ComfortSmart Deluxe Cot — the closest thing you can get to a portable bed — for when I have a vehicle to stash my gear. Otherwise, I’m bringing this hammock and its rain fly.

The MZOO sleep mask is only $18 on Amazon. I buy them four at a time, stashing them in my house and in all of my potential travel bags. They’re the best I’ve found and really make a big difference if you’re sleeping odd hours during daylight or under fluorescent lights. Combine them with the Mack’s earplugs and you’ll stand a better chance of getting the rest you need and being able to perform when it counts.

During my deployment to the Surfside building collapse, we technically had access to showers. Sure, they were cold showers, but they were good clean water. The problem was, after leaving our 18-hour shifts we’d then have to debrief our own team and then brief the oncoming shift for what had happened during our shift. It was … a lot of unnecessary meetings. By the time I got done, I was so smoked I just didn’t have the energy to undress and dig out clean clothes from my bag.

I remember sort of stumbling into this command room next door to the rubble pile, and on the counter next to a box of Dunkin’ Donuts there sat a box of Firewipes. These are sort of like fancy baby wipes that we use to wipe contaminants like soot, smoke, and other carcinogens from our skin. That night, I took a little Firewipe shower, and it was more than enough. Since then, I bring wipes everywhere, although I prefer the Duke Cannon brand.

In addition to my Garmin InReach Explorer+ GPS and satellite texting device, I like to carry a 406 MHz emergency beacon from ACR as a backup. It’s stupid simple — flip the antenna up and smash that power button. I see this as a plus in a true emergency situation where you might not be thinking as clearly as you’d like.

For nutrition, I can’t say that I really care about a keto diet, but I’ve found that my body just generally runs better on gluten-free foods. These paleo kits from Steve’s are lightweight, high-quality fuel that taste a heck of a lot better than a military MRE and aren’t loaded with salt.

Besides power banks and charging cables, B-con (bleeding control) med kit, and garbage bags to store wet gear, I’ll also stash a good paperback book. Those who have served in the military will remember the hurry-up-and-wait game, and the same holds true for any search-and-rescue deployment. You may get some downtime whether you want it or not, and it’s nice to have a little escape for your brain close at hand. Normally, I try to bring a book that I’ve read before and would love to read again, which hopefully has nothing at all to do with my current mission. I’ve alternated between Mario Puzo’s The Godfather and Michael Shaara’s The Killer Angels about the Battle of Gettysburg. In a bad situation, it’s always nice to read about someone who had it worse than you do.

Andrew Schrader is a commercial pilot and Urban Search and Rescue (US&R) Structures Specialist attached to the State of Florida’s US&R Task Force. Reach out on Instagram or Facebook via @reconresponse or andy@reconresponse.com.

Bag Drop: Hiking the Grand Canyon with an Osprey Kestrel 48I needed a pack that was tough and dependable, so I chose the Osprey Kestrel 48. It weighs about 3.5 pounds and has a multitude of pockets.Bag Drop: 5.11 RUSH12 Hurricane Response BackpackThe RUSH12 is my “12-hour pack” used for the 16- to 18-hour shifts that we end up working during a hurricane search and rescue deployment.Bag Drop: 5.11 Tactical Responder ALS Medical BagMy 5.11 Tactical Responder ALS medical bag travels with me everywhere my vehicle goes, and contains a variety of first aid and trauma tools.Preps of the Pros: OFFGRID Editor Tom Marshall’s EDC Gear & Go BagDefend, Move, Communicate, Medicate — your EDC gear should enable you to protect yourself, navigate, call for help, and treat injuries.Bag Drop: Viktos Upscale 2 Urban EDC Sling BagThis Viktos Upscale 2 sling bag belongs to one of our female freelance photographers, who wears it instead of carrying a traditional purse.How Outdated is Your First Aid Kit?If you put together a trauma medical kit or individual first aid kit (IFAK) several years ago, it may be outdated or expired.Bag Drop: Mystery Ranch Shift Plus 900 Modular BackpackWorking as a forester and volunteering for search-and-rescue incidents is demanding. The Mystery Ranch Shift Plus 900 is perfect for those tasks.Bag Drop: Personal Security Detachment BackpackThe point of Personal Security Detachment (PSD) is to offer close protection of a high-value individual. You don’t want to look heavily-armed.Plate Carrier Placards Overview: Part 1The market for plate carriers, chest rigs, and modular plate carrier placards has seen unprecedented growth in the last 10 years.