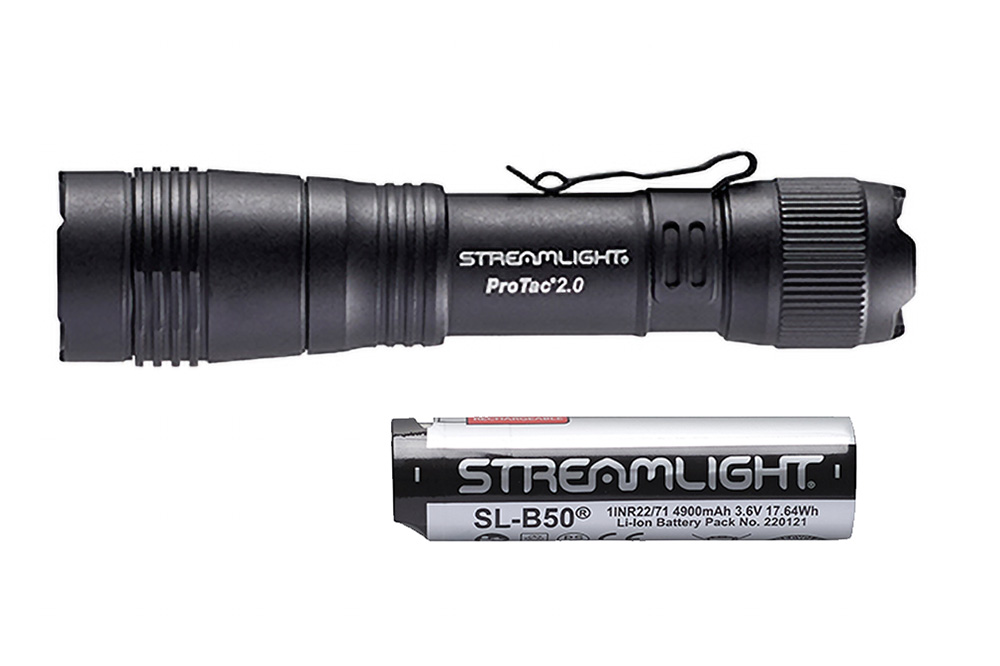 A bright, reliable flashlight is certainly one of the most valuable items you can carry on a daily basis. I use my EDC light at least once a day, and that’s under normal circumstances — in many emergency scenarios, a flashlight is worth its weight in gold. The Streamlight ProTac series has been one of the industry’s most popular choices for more than a decade, thanks to its durability, affordable price, and useful features. The company recently announced version 2.0 of this flashlight, now with much higher output, longer run time, and a USB-C charge port built into the housing. Read on as we take a look at some of the new features and variants of the Streamlight ProTac 2.0.

The first major change to the ProTac 2.0 is a transition to a new, proprietary SL-B50 battery pack. But before you groan at the prospect of a proprietary battery, listen to what it offers. It’s a 4900mAh 3.6V cell, meaning it offers more than 50% larger capacity compared to Streamlight’s universal 2600mAh 18650 batteries. This battery can also be charged directly via an included USB-C cable, either outside the light or inside it through a retractable collar. A built-in charge status LED turns green when the battery is fully charged:

Thanks to the extra capacity, the Streamlight ProTac 2.0 can output more lumens without compromising run time. It offers three brightness modes plus a strobe setting:

These settings can be accessed in one of three programmable sequences via the TEN-TAP switch:

The ProTac 2.0 is 6 inches long, weighs 8.25 ounces with battery, and its aluminum housing is IP67 rated dustproof and waterproof. It comes with the SL-B50 battery, removable metal pocket clip, belt holster, and a USB-C charging cable.

There’s also a weapon rail-mounted version of the light called the ProTac 2.0 RM. It includes an integrated picatinny rail mount, and is available in a complete kit with pressure switch and attachment/wire-routing accessories.

MSRP for the new ProTac 2.0 is $195, although street prices should be roughly $100 based on Streamlight’s historical pricing. The RM version will be slightly more, although we don’t have an exact price for that at the moment. For more information on these lights, go to Streamlight.com.

Plate Carrier Placards Overview: Part 2The idea of one plate carrier or chest rig with swappable placards is far more attractive than setting up multiple rigs for different uses.Plate Carrier Placards Overview: Part 1The market for plate carriers, chest rigs, and modular plate carrier placards has seen unprecedented growth in the last 10 years.Bag Drop: 5.11 Tactical Responder ALS Medical BagMy 5.11 Tactical Responder ALS medical bag travels with me everywhere my vehicle goes, and contains a variety of first aid and trauma tools.Bag Drop: Viktos Upscale 2 Urban EDC Sling BagThis Viktos Upscale 2 sling bag belongs to one of our female freelance photographers, who wears it instead of carrying a traditional purse.Review: Phantom Hill CTF-1 Infrared Laser and IlluminatorWith a white light, IR laser, and IR illuminator in a single unit, the Phantom Hill CTF-1 is an all-in-one solution for low-light and NV use.Bag Drop: 5.11 Tactical RUSH72 Search and Rescue PackI keep this RUSH72 backpack inside a vehicle, except for the rare occasion I’m out in the field and away from basecamp overnight.Video: RECOIL Staff at Finnish Brutality 2022Iain Harrison, the Editor of RECOIL, flew into Helsinki to participate in Varusteleka’s Finnish Brutality 2022 competition.Interview: John Correia of Active Self Protection (ASP)Active Self Protection channel owner John Correia narrates and discusses videos of real-life violent encounters from across the world.iPhone 14 Adds Satellite SOS and Crash Detection FeaturesThis week, Apple announced some new emergency preparedness capabilities for the iPhone 14: automatic car crash detection and satellite SOS.