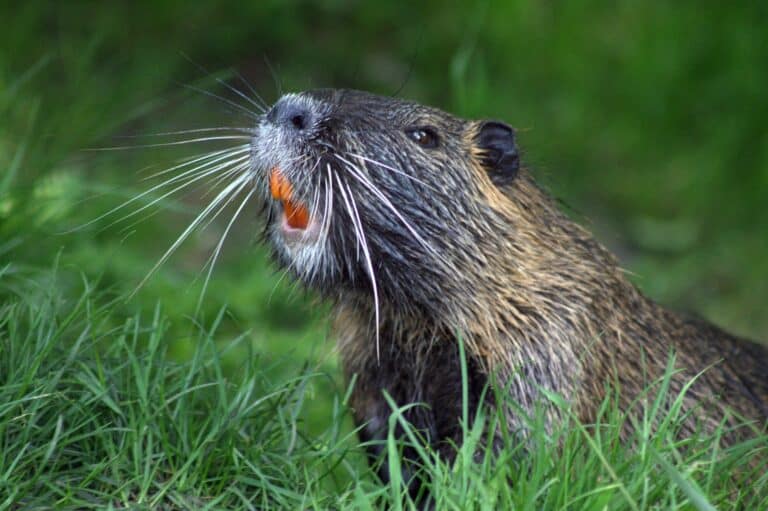 Beavers are among the most famous of all animals worldwide, with their very name being synonymous with industriousness and work ethic.

They also happen to be critical species across much of their range and are responsible for reshaping and maintaining the environment to such a degree that entire other species depend on their activity.

These semi-aquatic mammals are the second largest living rodents and can fell entire, mature trees for use in building their homes. That’s amazing, and even more amazing to consider that they do it all with their teeth.

Come to think of it, with teeth like that, could it be possible that beavers are dangerous?

Yes, beavers are dangerous. Beavers are large, have immense, sharp teeth, are fast on land and in the water, and are very territorial. They will fight fiercely to defend homes and families, and should not be underestimated.

Beavers, despite their charming appearance and amazing intelligence, are sizable, powerful, and dangerous animals. Attacks are humans are uncommon but hardly rare.

Some deaths have even been attributed to them. If all you know of them is their dam-building behavior you might be in for a shock. Keep reading to learn more about these amazing, but dangerous, animals.

Beavers are rodents, but they are also one of the largest in the world.

Beavers are far more massive than even the biggest rat, as their bodies can grow up to four feet long, stand two feet tall at the shoulder and they can weigh over 60 pounds. That’s a lot of rodents!

They are most notable for their huge teeth that continue to grow throughout their lifetime, teeth so large and sharp they use these teeth to literally cut down trees.

And mature, trees, mind you, ones as thick as a man’s leg! They process trees into smaller sticks and branches to be used for constructing their lodges.

Beavers are remarkable swimmers and can stay submerged for up to 15 minutes at a time.

When swimming, their tails act as a rudder and they also put them to use as an alarm system, slapping the water with them to alert family members that predators are around.

The family structure of beavers is perhaps the most interesting thing about them. Beavers are highly intelligent social animals and live in colonies or families made up of monogamous paired males and females along with their offspring.

The family unit will work together to build and maintain their home, the lodge. As the family grows with new additions, older siblings help out in raising and teaching the younger ones. Wholesome stuff, huh?

But, it is this remarkable dedication to family that makes beavers so dangerous: they will fight to the death to protect their homes and their kin.

Are Beavers Aggressive Toward Humans?

Yes. Beavers will alert to human presence near their territory quickly, and become highly agitated the closer people get to their lodge, especially when they have a mate or young inside.

Have Beavers Ever Attacked Humans?

Yes. There are many reports of beaver attacks on humans, and while most are non-fatal, many involve serious injuries and complications, and some have resulted in death. A man in Belarus had an artery in his leg severed by a beaver bite and died.

How Do Beavers Attack?

Beavers attack predominately by biting, though they also have stout claws and strong feet. A beaver’s prominent incisors are oversized and chisel-like in profile; razor sharp, and ideal for cutting.

The bright orange color of their teeth is due to extra-thick enamel that is rich in iron compounds.

These chompers are no joke, and beavers can easily bite a hunk out of you in one shot or produce deeply penetrating injuries.

Worse, beavers are fast, strong, and tenacious, and may attack as a unit. It is easy to see how damage can quickly pile up from such an attack.

In general, beavers will only attack humans if they feel directly threatened, if their territory is invaded or if their young are in danger, but given their size, strength, and sharp teeth, even a “defensive” beaver can cause serious injury.

Also, keep in mind that beavers are intelligent and sophisticated animals, and depending on their condition, family situation, and experiences with other people and predators they might be more aggressive or less so.

Like all wild animals, beavers can be dangerous and are certainly unpredictable, and are perhaps more unpredictable than most.

No. Beavers are mostly herbivorous in their diet and will not attack a person with the intention of eating them.

Yes, extremely. Beavers have a very clear idea of what is and are not their territory, and they don’t like anything intruding in it except family.

Again, beavers will go to great lengths to protect their homes and families, and most attacks on humans result from people blundering into their territory or knowingly getting too close.

How Strong is a Beaver?

Very strong. These are girthy rodents with the brawn to match. Beavers can haul huge logs or stones long distances, by land or water, to build their huge and intricate lodges, and they are famous for endurance.

Their jaw muscles in particular are overdeveloped. In conjunction with their teeth, this means their bite is truly something terrible.

What Should You Do if You See a Beaver?

If you spot a beaver in the wild, do not approach it, and if you notice the animal making agitated noises, slapping the water with its tail, or swimming quickly in your direction, leave the area immediately if you can.

If you must go near a beaver lodge or dam, do so with extreme caution: you are in danger.

Try to stay downwind if you are at a distance: beavers have unremarkable eyesight but a keen and highly tuned sense of smell.

What Should You Do if Attacked by a Beaver?

If you are attacked by a beaver, run away if you can. If you must fight, use anything you can that can act as a weapon or shield. Keep the beaver at a distance and avoid the rending teeth at all costs.

Beavers can easily bite your fingers off or take a huge chunk out of your arm or leg. Beavers are tenacious and will not give up easily, so be prepared for a long and brutal battle. Fight like your life depends on it: it does.

Also, keep aware of the approach of more beavers. As bad as one is, multiple will be even worse, and family members will fight to protect their relatives. You could end up mobbed by beavers if you are unlucky.

Yes, and many nasty ones in fact. As if their general disposition and teeth weren’t bad enough, beavers also happen to carry a huge variety of nasty diseases that people can catch.

They are most known for giardiasis, or “beaver fever,” but they can also give you rabies, salmonella, leptospirosis, and tularemia to name a few.

Close contact with a beaver, its urine-caked mounds, or its corpses can easily infect you with one or more of these germs and others besides.

A bite from a beaver will invariably become infected unless treated immediately and thoroughly. If you are bitten by a beaver, make sure to seek medical attention immediately.

The post So, Are Beavers Dangerous? appeared first on Survival Sullivan.