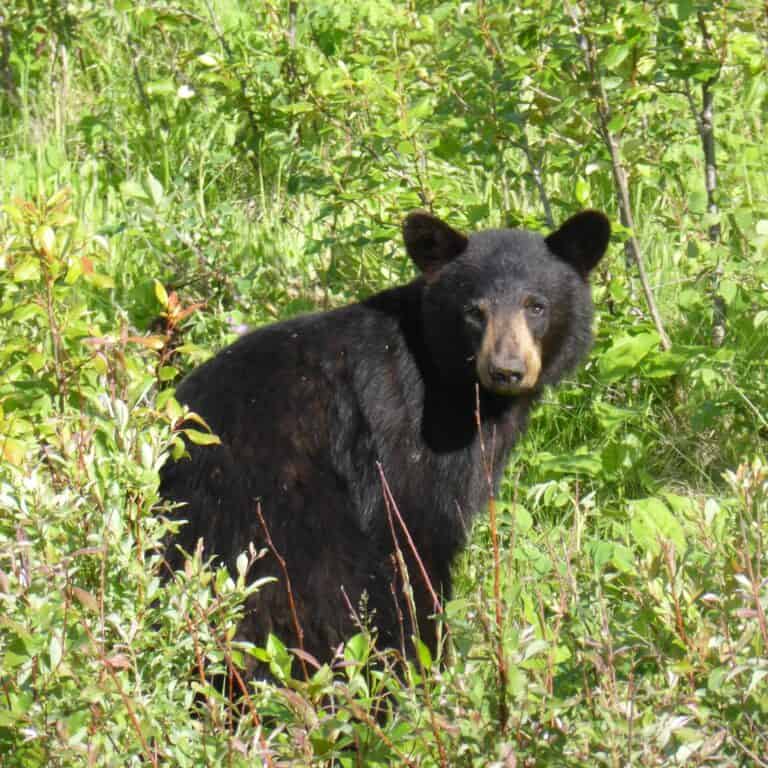 Compared to other bears around the world, black bears face the least overall pressure from humans and are at the least risk of ecological displacement and extinction.

Compared to brown bears and polar bears, black bears are found in many more places throughout North America, and commonly come into close proximity with people.

Black bears are also much smaller than their brown bear and polar bear cousins, which will be a relief to some. But are black bears dangerous?

Yes, black bears are dangerous, though not as dangerous as brown and polar bears. Black bears may weigh upwards of 500 pounds in some cases, and are extremely strong and surprisingly quick.

Black bears rarely attack people but their attacks can cause severe injuries and occasionally result in death.

If you live in an area where black bears are common or will be traveling to an area where they can be found, you’ll need to learn more about them and what to do if you’re attacked. You can learn more below.

Black bears, like most bears, don’t want anything to do with people and are instead highly motivated by food.

The vast majority of a black bear’s time is spent looking for food if they aren’t sleeping.

Especially in the run-up to winter hibernation, black bears will be eating everything in sight in an effort to pack on enough fat to make it through to spring.

But, compared to other bears black bears are more commonly found in and near places where humans also live.

They have long learned to associate human habitation with sources of food and with better feeding opportunities. Trash cans, dumpsters, coolers, landfills, and the like all serve to attract black bears.

Thanks to this and irresponsible people who actually feed them, many black bears are quite bold in their dealings with humans, many having lost their fear of them entirely.

Though your average black bear encountered in the wild is likely to flee from human contact as soon as they are detected, this is not a guarantee and you are advised to have a plan for responding to such an encounter if you’ll be in any area where black bears are common.

Are Black Bears Aggressive Toward Humans?

Generally not, but attacks upon people are far from unheard of for a number of reasons.

First and foremost, compared to other bear species black bears tend to be the most territorial, usually as a strategy to secure ongoing access to food.

Unless they are near a prime feeding spot, say a stream that is packed with fish or a dumpster that is overflowing with old food, black bears rarely tolerate the presence of other bears.

Second, like all bears mothers that have cubs in tow can become extremely aggressive very quickly.

It should be noted, however, that black bear mothers are not typically as twitchy as brown bears that have cubs around, although this is a matter of degrees only.

Have Black Bears Ever Attacked Humans?

Yes, quite a few times actually. Attacks from black bears have been recorded since contact was first made with them, and although they are not as roundly feared as brown bears and polar bears they are still a significant threat.

Most notably, black bears are responsible for more attacks upon people since they have a far greater number than brown bears, although per capita they attack humans at lesser rates than other bears.

This is cold comfort for someone who is dealing with a black bear attack, naturally, and staying alert for their presence and possible aggression will be just another part of life if you are in their territory.

How Do Black Bears Attack?

Black bears attack using their claws and teeth, swatting at the upper parts of a person’s body, sometimes while standing upon their rear legs for better reach.

Although not as immensely strong and destructive as a brown bear or polar bear, black bears are still quite strong and a few swipes are enough to do severe damage. The bite of a large black bear is more than capable of crushing your skull.

Attacks are usually precipitated by huffing, growling, stamping at the ground and one or more fake charges depending on the circumstances.

Black bears are likely to attack whenever they are surprised at close range, are encountered when they have cubs in tow, or when they are starving.

Several well-documented historical accounts detail extremely lean bears brazenly attacking people with no warning and no provocation, presumably in an effort to eat them.

Also keep in mind that black bears are more territorial than brown bears, and whereas a brown bear is less likely to attack just because you are in its territory a black bear might not have any such hesitation.

But in general, so long as you are not antagonizing the bear and do not surprise it or approach it, you probably don’t have much to worry about when it comes to aggression from black bears.

Generally speaking, whenever a black bear attacks you you should fight back with everything you have because they are not going to stop attacking you until you are dead; when you die they will eat you.

Yes. Black bears are fairly territorial, and though they are just as likely to retreat from human presence in their territory it is hardly uncommon for them to become aggressive when someone gets too close to their turf.

A territorial display usually consists of the bear standing on its hind legs, huffing or barking, stamping its front paws on the ground repeatedly, and growling.

If that happens, you want to keep an eye on the bear and back away smoothly but quickly.

How Strong is a Black Bear?

Precise scientific estimates of black bear strength are difficult to come by, as the only bears that can be coaxed to participate and experiments are tamed bears or those raised in captivity at refuges, and they don’t make the best exemplars of the species compared to their wild brethren.

However, black bears are easily twice as strong as human beings and more than capable of rapidly climbing tall trees, scaling steep slopes, and disassembling other large animals, alive or dead. It should go without saying that this includes you!

What Should You Do if You See a Black Bear?

If you see a black bear, you should keep your distance. If the bear is far away, make some noise so the bear knows that you are there and it will likely avoid you. At close range, avoid startling the bear but don’t take your eyes off of it in case it attacks.

Under no circumstances should you approach a black bear or try to touch it. If the bear is approaching, and you are reasonably certain that it knows you are there, prepare to take defensive action.

What Should You Do if Attacked by a Black Bear?

A black bear attack is usually precipitated by a threat display. As mentioned above, this consists of chuffing, puffing, or barking sounds, swiping and clawing at the ground, stamping of the front feet, and standing up on its hind legs.

When this occurs, you should engage in a sort of showdown with the bear. Get as large as you can, stand close together with other people if they are with you, and raise and swing your arms.

Make noise, act aggressively. Use sticks, tools, or any other objects to make yourself look as big, tall, and impressive as possible. With luck, a black bear will feel outmatched and retreat.

If this does not work, ready your bear spray or firearm if you have one. If the bear charges, engage it before it gets too close but keep in mind that black bears regularly perform mock or false charges. Stand your ground, if you run it will pursue you for sure.

If the black bear follows through with his attack fight back and don’t give up. Unlike brown bears which will attack until they think the threat is eliminated, a black bear is far more likely to persist until you are absolutely dead and then eat you.

Black bears do carry diseases, but rarely if ever do these diseases pose a threat to people.

Canine distemper is one common black bear disease, though they often carry a variety of ticks and fleas. Bear meat can also easily transmit foodborne diseases if not thoroughly cooked completely well done.

The post So, Are Black Bears Dangerous? appeared first on Survival Sullivan.