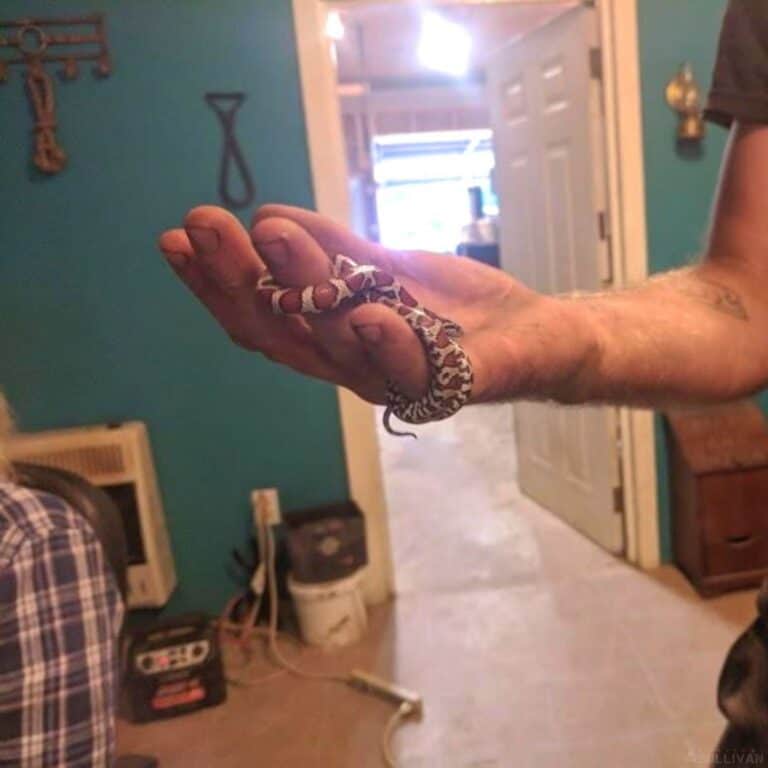 One of the most commonly encountered snakes in the southeastern United States is the corn snake. Commonly encountered creeping around buildings and investigating grain storage sites, these colorful snakes are major predators of mice and rats.

They are also commonly confused with copperheads, and some folks warn that corn snakes are in fact about as dangerous as copperheads. Is this true? Is the corn snake poisonous?

No, the corn snake is not at all poisonous, although it does have a distant ancestor species that was. Corn snakes kill by constriction, not venom, and accordingly are no threat to humans.

Compared to other species, corn snakes have a relatively small geographical range in the United States, but they are important predators of grain and household pests.

This propensity combined with their docile, nearly friendly temperament has made them a friend of every farmer and gardener, and an extremely popular pet snake. Keep reading to learn more.

Physical Characteristics of the Corn Snake

Corn snakes are slim snakes, and anywhere from two to six feet long, though usually shorter.

Their primary coloration is an ochre- or brown-yellow to rusty orange with patches of red running along the entirety of their length.

These patches are outlined in black or a very dark brown. The head of a corn snake is broadly triangular and characterized by its large, round eyes with round pupils.

The belly of a corn snake is invariably a paler color with a distinctive, regular grid-like pattern that is sometimes said to be the reason for the corn snake’s name.

Ostensibly, this pattern is said to resemble Indian corn. However, the common name of the corn snake was earned way back in the 17th century owing to its aptitude for prowling around corn and grain storage sites while hunting for rats and mice.

No, the corn snake is not poisonous, at all. It is a constrictor, and so crushes or asphyxiates prey by squeezing it.

However, corn snakes are commonly mistaken for dangerous copperheads, which are poisonous, owing to their similar coloration and markings.

Where are Corn Snakes Usually Found?

Corn snakes are most common throughout the American South, and their range extends as far north as Kentucky with sparse populations in New Jersey.

The corn snake is a terrestrial creature that prefers habitats with open fields, tree lines, and abandoned structures where they can shelter and hunt for prey.

In the wild, their diet includes mice, chipmunks, and young rats. Baby rabbits and lizards are also sometimes eaten.

Anywhere such prey can be found in their range, corn snakes will be found, too. Of note, corn snakes are excellent climbers and can regularly be found scaling trees in an attempt to get at undefended bird eggs.

Corn snakes are most commonly active during the day, and that is when you’re most likely to encounter them.

At night, they tend to retreat to warm, secure crevices and rocks, logs, or under buildings in order to shelter through the night.

Like most snakes, when their body temperature is lower they are less active and so hunt less.

This is not to say you won’t bump into a corn snake at night, but if you are on the lookout for them your best chance of finding them is during the day.

No, corn snakes will not readily bite unless severely provoked and these snakes are renowned for their general good nature.

Their docility and reluctance to strike have made them the darlings of the pet snake market, and there are second only to most boas in the United States in this capacity.

However, like all wild animals, corn snakes will defend themselves if cornered, stepped on, grabbed, or harassed. Corn snakes are not renowned for their nasty bite, but they do have teeth and know how to use them.

Is the Bite of a Corn Snake Painful?

It can be. Corn snakes lack the fangs that are so prominent on venomous snakes, but they are possessed of several rows of tiny, sharply hooked serrated teeth.

The corn snake uses these teeth to grasp prey in order to reel it into its deadly embrace, but it can also use them defensively by biting predators or your grabby hands.

These teeth are easily capable of lacerating flesh, and though the wound itself will rarely cause major damage it can easily become infected.

It is this infection that should be your primary concern since all snakes’ mouths are completely full of nasty bacteria.

This infection could result in serious complications, so you should always make it a point to thoroughly clean a bite wound from a corn snake, and if you notice any prolonged redness, swelling, intense pain or other tenderness seek medical attention immediately.

No. Like other harmless snakes, Corn snakes are renowned for their all-around good behavior and easy temperament.

These are snakes that are content to hunt and be left alone, and it is difficult to provoke them unless you are really trying or you step on them. Again, their calm demeanor is what has made them so popular as pets.

That being said, like every wild animal corn snakes will defend themselves if they have to.

When threatened they will try to escape at once, but if forced they will curl themselves into a compact, curvy ball or else thrash around madly. If they cannot escape, or the predator persists, they will bite.

Will a Corn Snake Attack Pets or Livestock?

Corn snakes are not a threat to most animals, pets, or livestock. As a rule, they mostly subsist on small rodents like mice along with the occasional rat but they also eat amphibians, and some other reptiles and seem to really enjoy bird eggs.

This means that larger corn snakes could be a problem if you have chickens or ducks, as chicks or ducklings, and all poetry eggs might fall prey to a corn snake.

Despite their length, corn snakes are slender and not as powerful or imposing as some other constrictors, and this means that larger eggs and animals are at no risk.

However, you should keep in mind that the appearance of any snake might be sufficient to severely startle larger livestock like sheep, goats, horses, and cows.

Panicked animals might stampede or else injure themselves or their neighbors in an attempt to get away from the snake.

Should You Get Rid of Corn Snakes When you Can?

Generally not. Although they might periodically be a threat to chicks and chicken eggs, corn snakes do a lot more help than they do harm around the farm in the homestead.

They are constant predators of several grain and household pests, and keeping those pest populations at bay will go a long way toward making your life easier.

These snakes, like all creepy crawlies whether we want to admit it or not, do have a part to play in the wild, and you are advised to relocate them whenever possible if they are becoming a nuisance.

If you don’t want to, there should be no shortage of animal control or reptile enthusiast organizations in your area that can take care of this for you.

The post So, Are Corn Snakes Poisonous? appeared first on Survival Sullivan.