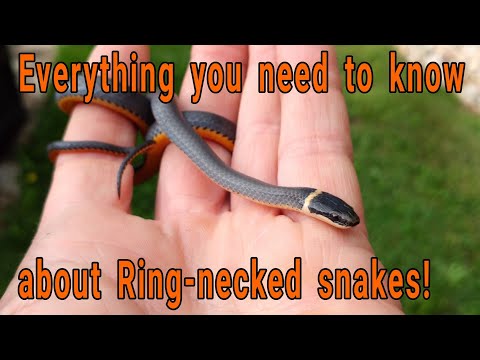 The ringneck snake is a vividly colored, secretive, and widely distributed snake found all across North America. Rarely seen during the daytime except perhaps when they are stunning, this is one snake with a contentious reputation.

Sometimes you’ll see them listed as venomous snakes, but other authorities have declared them entirely harmless. What’s the deal, and which is true? Is the ringneck snake poisonous or not?

Yes, strictly speaking, the ringneck snake is poisonous. However, its venom is very weak, and generally considered of no risk to humans barring complications, and bites that result in envenomation are rare.

This snake is incredibly interesting not just due to this factor, but also due to its vivid coloration and patterning, and also its other defensive behaviors. Luckily, these snakes are considered non-dangerous as a rule, and you can learn more about them below.

Ringneck snakes are as a rule smooth, straight, and slight of build, and can vary greatly in size according to where they are found, with adults measuring anywhere from 10 to 18 inches in length.

Colors can also vary, but as a rule are a highly contrasting, two-tone pattern with a blue-gray, charcoal black, brown, or brown-green back with a yellowish, orange, or bright red underside periodically interrupted by black or dark brown spots.

These snakes also have a distinctive colored neck band that looks like a collar immediately behind the head, from which the snakes derive their name.

This neck ring is usually the same bright color as the belly, but maybe more of an off-white color or earth tone from time to time and some individuals lack the neck ring entirely.

Is the Ringneck Snake Poisonous?

This is the single biggest point of contention concerning the ringneck snake species. Strictly speaking, yes, the ringneck is a venomous snake.

However, the venom is incredibly weak and of little consequence to humans even when the snake bites.

Digging into the biology of the ringneck a little more, you’ll find that it does not have true venom glands, but instead has what is called Duvernoy’s gland.

This is a gland located right behind the eye of the snake and creates venom that is then administered through rear-located teeth.

Now, how is that any different than a typical venom gland in other snakes? We won’t get into all that except to say that the organs have a different biological basis, and the ringneck uses this venom to subdue its prey, in conjunction with constriction.

Habitat and Range of the Ringneck Snake

Ringnecks are thought to be one of the most common snakes throughout the U.S. and much of North America, though intensive study and charting of populations are lacking.

Ringnecks are plentiful all throughout the eastern U.S. and along the eastern seaboard, with populations thinning out as you move west past the Mississippi river.

They are still commonly found in the Midwest and down into Texas, with their range extending as far north as southern Canada in some areas.

Out west, you’ll find ringnecks in Washington, Oregon, California, Nevada, and Utah, though populations tend to be scattered.

Ringneck snakes can be found in a wide variety of habitats, from woodlands and forests to grasslands, prairies, and even some desert regions.

One of the most interesting things about ringneck snakes is their ability to inhabit both rural and urban areas with equal aplomb.

It’s not uncommon to find these secretive little serpents in parks, gardens, abandoned buildings, and other man-made structures in close proximity to human populations.

Some herpetologists have even theorized that ringnecks rely on human presence as a screen or defense from their own predators.

And here’s a really fascinating fact: some evidence strongly suggests that ringnecks might even be social in nature, living in colonies or units of a few to as many as 100 snakes, with further evidence of a distinct hierarchy within these groups.

Though much more research is needed, that’s pretty amazing when most people think of snakes as cold, solitary, and emotionless creatures. Practically, it means that where you see one ringneck, you might have many, many more around.

Ringnecks can and will bite, but they are highly unlikely to bite even when provoked or handled.

If further pestered, they have a most curious defense in the form of a startle display whereby they curl their tail into a tight “pigtail” shape and flip over to reveal their bright underbelly at the same time.

If handled, they tend to thrash around in order to affect an escape, along with more musky secretions.

Does the Ringneck’s Bite Hurt?

It will be painful, yes, but not terribly so. The venom is not dangerous to humans, though it may result in some localized pain and swelling.

In some cases, there may be an allergic reaction to the proteins in the venom, but this is rare. If you are bitten by a ringneck snake, it is not likely to amount to much.

These snakes have very weak venom and their venomous teeth are set back far in their mouths. Combined with their small size this makes envenomation anything but certain even if you are bitten.

But if you are bitten by a ringneck snake and have any concerns whatsoever, it’s always best to seek medical attention just to be on the safe side.

Remember that infection of the bite site is always a concern and might prove to be more hazardous than the snake’s venom!

Is the Ringneck Snake Aggressive Toward People?

No, not at all. As a matter of fact, ringnecks are quite shy and reclusive by nature. Usually nocturnal, they prefer to stay hidden away during the day and only come out at night to hunt for food.

Even when they are out and about, they would much rather slink away unnoticed than confront anything head-on. Even when handled, biting is a defense of desperation for them.

Is the Ringneck Snake Aggressive Toward Animals?

To pets and livestock, no. Ringnecks don’t even hunt vertebrate prey most of the time, instead preferring to feast on slugs, snails, earthworms, insects, and other invertebrates.

They are not a threat to anything larger than themselves and will almost always try to escape if confronted by anything bigger.

Even your chickens and chicks have almost nothing to fear from a ringneck, and any dog or cat could make short work of one.

Because of their fondness for garden pests like slugs and snails, ringneck snakes can actually be quite beneficial to have around.

If you have a problem with these types of pests, a resident ringneck snake might be just the thing to help control the population!

Is it a Good Idea to Kill Ringneck Snakes?

No, never. These snakes, despite their venom, are almost totally harmless and fulfill important roles in the ecosystem.

They help to keep populations of garden pests in check, and they are a food source for other predators.

If you have ringneck snakes on your property, the best thing to do is to just leave them be and appreciate the fact that you have such interesting snakes living there.

Considering how distinctive most examples of this species look it is an easy thing to positively identify a ringneck snake, and that means you won’t have much to fear when you spot them.

The post So, Are Ringneck Snakes Poisonous? appeared first on Survival Sullivan.