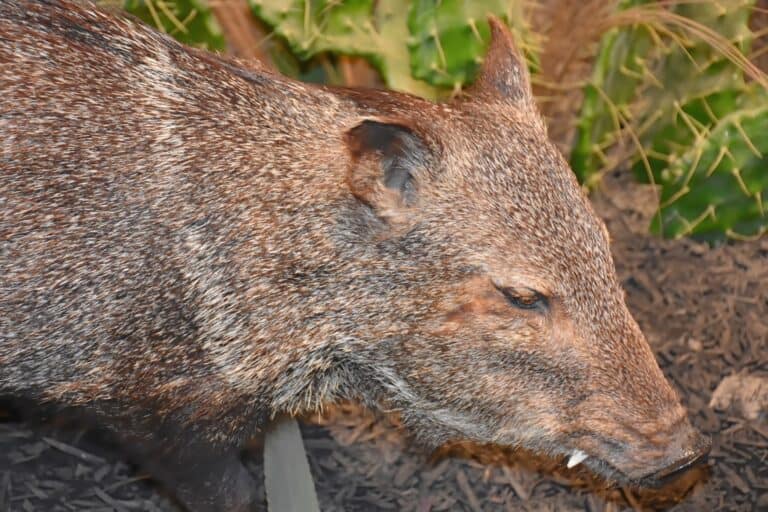 When you are trying to survive a desperate situation in the wilderness or the long uncertainty of a post-societal collapse event, you must have enough food to sustain yourself. Not just to avoid starvation, but also to keep your mind and body working at peak levels.

Slipping mentally or physically in an extreme situation could spell certain death, and to ensure you always have food to eat you will probably need to broaden your culinary horizons, so to speak, in either eventuality.

The good news is that there are all kinds of edible and nutritious animals out there in the world just waiting for you to make a meal of them.

How about feral hogs, also known as wild pigs? Can you eat feral hog in a survival situation?

Yes, feral hogs are safe to eat so long as their meat is thoroughly cooked. The nutrition of feral hogs compares favorably with domestic pig, providing plenty of protein, fat, and calories.

Feral hogs are multiplying exponentially in many parts of the world, and are turning into a genuine ecological disaster in some places.

This is horrible news, but the silver lining is that you will probably be able to count on finding some wild pigs to eat no matter where you are, assuming you know where to look.

This article will tell you everything you need to know about eating feral hogs in a survival scenario.

Where Can You Find Feral Hogs?

Feral hogs can be found all over the world, pretty much everywhere that has enough food to support them with the notable exceptions of the coldest regions and barren deserts.

Native to Eurasia and North Africa, the wild boar eventually spread throughout much of the world in the 19th century via trade, colonization, and their own migratory efforts in some cases.

These wild pigs mated with escaped and now-feral domestic pigs, spawning the very first hybrids that persist and torment mankind to this very day.

Pigs reproduce exponentially, and with few predators and even organized, incentivized hunts and generous bounties seemingly unable to curb their ever-expanding population half the world is now overrun with the damn things.

There are over six million feral hogs loose in 40 states, from California to Florida and New England.

Even the Hawaiian Islands have a major problem with these destructive beasts. Wild hog populations are immensely damaging to the areas they live in, and are a special threat to all kinds of crop and farmland.

The ecologically dangerous and growing problem of an exploding wild boar population in the US shows no signs of slowing, and as time goes on these critters will become more and more common.

This is a major issue, to be sure, but the good news is you can reliably locate “razorbacks” nearly anywhere you happen to be. This could prove to be a lifesaver whenever you need food in a survival situation.

Feral hog meat is high in protein and relatively low in fat when compared to domesticated pigs and other common sources of protein like beef. It is also an excellent source of thiamin, niacin, phosphorus, zinc, and selenium.

These same nutrients are found in pork from pigs raised on commercial farms, so it’s likely that the feral hogs you eat will be just as healthy for you as regular pork chops from the supermarket, assuming the animal was healthy to begin with.

In fact, the wild pig you are prepping for dinner might have actually been a domestic pig, and escaped captivity!

This is not always a given when eating feral pigs, but generally speaking, if an animal looks healthy then its meat will be as well.

As survival fare, it has everything you need for short-term fuel and much of what you need for long-term health.

How Does Wild Pig Taste Compared to Domestic Pig?

Very favorably. As a rule, wild animals, including wild pigs, tend to taste gamey, or “wild.” This is a distinct tang common to wild-caught animal protein and usually derives from the animal’s diet.

The taste of feral hogs is no different in this regard. Feral pork tastes like farm-raised pork with a bit of an aftertaste that has been variously described as “musky” or “earthy”.

It is not unpleasant, and if you are used to eating game then it will probably taste quite familiar.

In any case, proper preparation and cooking, to say nothing of seasoning, can help to minimize this taste.

With that said, the taste of wild pigs is also greatly influenced by what they have been eating.

If they have been feeding routinely on acorns or other nuts then their meat will have a sweeter flavor, while pigs that dine primarily on grasses will have a more earthy or vegetal flavor.

Is it Safe to Eat Wild Pig Raw?

Even if the animal appears healthy, it might be infected with trichinosis or any number of other parasites, bacteria, or other pathogens that can make you seriously ill.

Trichinosis is commonly associated with feral pigs and can be contracted by handling infected meat or eating it.

This disease is caused by the Trichinella spiralis worm, which encysts itself in the animal’s muscle tissue.

These cysts can then infect humans that eat the meat, and the worms will mature and reproduce in our intestines, causing fever, diarrhea, vomiting, and potentially death.

To avoid this gruesome infestation, you should always cook wild pig thoroughly to kill any pathogens that might be present.

Cooking to an internal temperature of 165 degrees Fahrenheit, and well done, ensures that all harmful germs will be destroyed.

Yes, though it is not as nutritious as meat. The skin of a feral hog can be eaten, and it contains some protein and fat. It is also a good source of vitamins A and E.

However, the skin should be cooked thoroughly before eating, just like the meat, to avoid any parasites or pathogens that might be present.

Yes and no: Bones are much too hard and dangerous for humans to eat as they are, but they contain bone marrow which is extremely nutritious.

This marrow can be cooked and eaten in several different ways to supplement your diet and has long been a staple survival food throughout history.

If you tried to eat the bones themselves you’d just wind up with broken teeth, or maybe choking on them.

The easiest way is by making a delicious and nutritious stock. Simply simmer the bones in water for several hours to extract all the flavor and nutrients from the marrow, then strain the stock and use it as you would any other broth.

Alternatively, you can take the direct approach, cracking or sawing open the hog’s bones to scoop out the marrow. After this, you can cook it or add it to an existing dish.

A good-sized wild boar will supply plenty of meat, but you should not neglect the marrow if you can help it.

Is it Safe to Eat the Organs of Wild Boar?

Yes, most of them, so long as the organs are prepared carefully and thoroughly cooked as with all of the other meat of the boar.

The main organs you will want to focus on are the liver, heart, and kidneys, as these are the most nutritious.

The lungs, spleen, stomach, intestines, and pancreas can also be eaten, but they are not as palatable as the other organs and all require diligent cleaning in order to make them safe for consumption even prior to cooking.

The liver is especially good for you, as it is rich in vitamins A and B12, as well as iron. It should be inspected thoroughly before eating, however, as the tainted or diseased liver can easily cause food poisoning.

The heart is pretty much all muscle and a good source of protein and minerals such as phosphorus and potassium.

It has a strong flavor that some people find unpalatable, but this can be minimized by cooking it slowly.

Wild Hogs Can Hurt or Kill You

It must be mentioned, that you aren’t going to have an easy time killing these swine unless you take them with a gun or bow from ambush. Feral hogs are tough, quick, and very, very mean.

Many hunters, hikers, and simple passersby have had the misfortune of running into these beasts at close quarters and will forever bear the scars left by the hog’s tusks as a consequence.

Be prepared for a real and dangerous fight if you try to take one up close, and if at all possible pick one off with a ranged weapon.

The post So, Can You Eat Feral Hog for Survival? appeared first on Survival Sullivan.