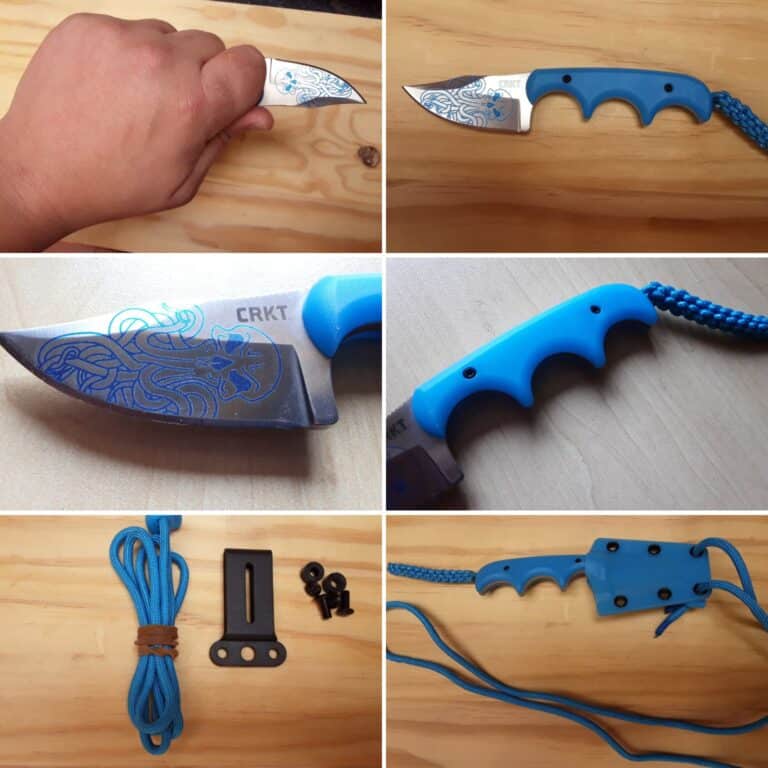 “In his house at R’lyeh dead Cthulhu waits dreaming” – H.P. Lovecraft, The Call of Cthulhu

That’s got to be one of the most quoted lines in all of Lovecraft. I’ve recently taken quite a liking to the works of Mr. Lovecraft, so when I saw a depiction of his most iconic character on a blade I’d been itching to try…well, I had to get one! The blade in question was, of course, the CRKT Minimalist Bowie.

When it comes to everyday carry knives, CRKT is a company that seems to sort of dominate the space. They have so many great EDC options that it’s not even funny.

Some of their most popular pieces include the M16, the CEO, the squid, and, of course, the minimalist.

So, what makes the minimalist so popular? How has it become something of an EDC staple? Does the knife live up to the hype?

Well, that’s what we’re going to look at today but first, we need some specs and features.

A Staple of the EDC Community

Designed by Alan Folts, the knives of the minimalist family are purpose-built for utility.

Their lightweight and compact design have made them a popular EDC option for people looking for their first EDC fixed blade – well, that and the great price tag! This is because they have such great versatility to them.

You can use them at a campsite for food prep, or to process an animal after a hunt. If you’re a suburbanite – maybe working in retail – you can use it to process boxes and cut through cling wrap (trust me, you’ll need a blade to get through that stuff occasionally).

The minimalist that I purchased is the Bowie with the Cthulhu print, but if that’s not your style, there are two other Bowie styles: the first is just a plain bead blasted blade and the second is the Gears variant – a set of gears printed on the blade and a neon green sheath.

I don’t think there’s an all-black (blackout) version of the Bowie out yet. Now, I can already hear you asking: “what if I don’t want a Bowie-style blade?”

Thanks for asking, and there are many other flavors/styles to choose from. The other options include:

If you don’t see one you like in the current selection, don’t panic! The minimalist family keeps expanding with a new entry appearing every year or so.

The minimalist has many positive aspects which make its popularity easy to understand.

First off, the full-tang construction makes it nice and sturdy. It’s also super cool to look at, and the bright blue sheath is perfect for people like me who have bad eyesight – kind of hard to miss a bright neon blue sheath on a dark brown table.

Also, and maybe this is just the kid in me, but the sheath on this one glows in the dark! How cool is that?

It’s ridiculously lightweight, and the handle is super comfortable to hold onto. Speaking of the handle, it’s got a smooth, polished finish to it, but you still get a secure grip on the knife.

The cord fob at the bottom of the handle gives your little finger a place to hold onto. The finger choils are also nice and deep so that knife’s not going anywhere unless you want it to.

The blade is razor-sharp out of the box and is super easy to sharpen.

As far as carry options go, the CRKT Minimalist knives are well-known for their versatility. It comes with a cord so you can carry it as a neck knife, but it also comes with a belt loop and screws so that you can put it on your belt and carry it that way if you prefer.

However, if you decide to carry it, the knife’s small size means it won’t print the way some other fixed blades will. Sheath retention is great, the knife sits snug as a bug in a rug, and nothing rattles.

Okay, so what are some of the failings of this knife?

For the most part, I didn’t have any issues but there was one thing I really didn’t like: the cord.

Don’t get me wrong, I understand the appeal of a neck knife and I can see where it would be useful to carry a blade that way.

I have even carried a neck knife myself occasionally, but the cord on the minimalist is just very uncomfortable for me.

As soon as the cord was around my neck, the discomfort set in, and I had to take it off. It just felt like I was being strangled. In the end, I only managed to carry my minimalist as a neck knife for a day.

The other thing and this is more a nitpick than anything else, is the belt loop. As far as I can see you can only set it for scout/appendix carry (horizontally on your belt).

As far as the blade itself goes, this model uses the same steel as the SOG Mini Instinct which I reviewed a while back (5Cr15MoV). This means it does carry some of the same issues.

The edge retention isn’t great so if you’re doing a lot of cutting with it, you may do more sharpening than you would with other steels.

With that said, the minimalist knives are also available in D2 which has better edge retention and is just as easy to sharpen.

Now, just because I didn’t really have any issues doesn’t mean there are no issues. I took to the web and found that the most discussed issues were:

The size of the knife came up a handful of times with many people saying it was a bit too small for them and so they picked up a different knife. The other complaint size-wise was the handle.

Some users weren’t too keen on the resin handle scales and found them to be a little rough. Other users found that the finger choils were either too deep or not deep enough.

In fact, when I reached out on Facebook to find out what people thought about the knife, one guy pointed out that the deep choils limit how you can hold the knife.

The baseline steel – the most common steel used – is 5Cr15MoV. A lot of the complaints I read mentioned that this steel was very soft and that it didn’t hold an edge too well. Some reviewers mentioned that the knife was dull when they got it.

Another common complaint about the blade was that it scratches easily – though this wasn’t as common as some of the other complaints.

Okay, this was a big one, the carry options. We’ll start with the cord and cord clasp for carrying the blade as a neck knife.

The clasp was mentioned in several reviews as being flimsy/fragile, only lasting a few weeks or months before falling apart.

The cord itself is not just uncomfortable, it’s a serious choking hazard! This is why many users have replaced the cord with a breakaway chain.

The sheath is also mentioned a few times as being somewhat unreliable with knives occasionally falling out of them and disappearing.

Apart from the sheath, the biggest complaint was probably about the belt clip. Some users use thick belts which can’t fit through the loop. Others find that it’s too loose on their belts.

The clip itself can only fit in two positions (vertical and horizontal) and can’t be adjusted to sit at an angle. I also saw reviews that mentioned the clip breaking easily.

I’ve carried two other fixed blades since getting into the EDC hobby, one of which was the SOG Mini Instinct. Both knives use the same blade steel, are lightweight, and can be either neck or belt knives.

That, however, is where the similarities end. The overall length of the minimalist is longer than that of the Mini Instinct as is the blade length.

Both handles are comfortable, but the minimalist has deeper finger choils and that cord fob for your little finger whereas the Mini Instinct just had that nasty chafing nub on the end.

As far as which is the better blade, and I know it’s not really a fair question, I think the CRKT Minimalist will probably do more – purely because of its ergonomics and greater length.

Well, I think that about covers everything. I hope you guys and gals enjoyed my review of the CRKT minimalist. Now I want to know what your personal experience(s) have been with this knife.

Thanks for reading and I’ll see you for the next one! Take care!